Cancer Centre to be launched on Kalamassery MC Campus 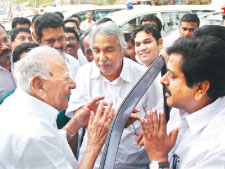 A cancer centre with international standards will be launched in the city if all goes accordingly as planned.Chief Minister Oommen Chandy said the government would soon set up a cancer centre on Kalamassery Medical College campus at a high level meeting recently.

“The cancer centre would function as a separate entity, though it will be set up on the medical college campus. An expert committee will be soon appointed to prepare a Detailed Project Report (DPR) for the cancer centre project. To monitor every activity pertaining to the project, a special officer will be appointed” , Chief Minister added.

Jamal Manakkadan, Kalamassery municipal chairman, who was present at the high-level meet for the cancer centre, said the municipality will waive off Rs 4.5 crore, which the municipality is to get from the Kalamassery Medical College.“Such a decision has to be taken as the amount due from the medical college by way of building tax and the building permit fee comes around Rs 6 crore. Now the medical college has been taken over by the government. Hence the council decided to waive off the amount, as the services are becoming free to the public once the takeover happens,” he said.