Axel Erlandson was a regular Swedish American farmer, till he started a new hobby. His advertised his hobby as “See World’s Strangest Trees here”. His experiment with horticulture was to shape trees.

The idea emerged from the information he got from his wife and daughter about the oddities in mystery spot in California, which claimed to defy the laws of physics. They suggested the money people were ready to pay for seeing odd things. Axel got excited with the idea and bought a piece of land where he started his first creation “Basket Tree”. He bent, cared and grafted the tree into odd yet fantastic shapes. He called his creations “Circus Trees”. For Basket Tree Axel used six sycamore trees, placing them in a circle and then grafting them together to form diamond patterns between them

Erlandson was very protective of his methods and never shared the secrets of these beautiful creations. But Erlandson wanted toErlandson_twolegtree showcase this work at Ripley’s. In 1947 after opening up his Circus trees he wrote a letter to Robert Ripley showcasing this work. Post that Erlandson’s tree have been mentioned 12 time in “Ripley’s Believe it or Not”. 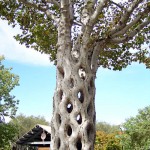 In later 1963 Erlandson sold his work property to Larry and Peggy Thompson for $12000. But he stayed there as the caretaker of the tree. Next year he died taking the secrets of the Circus tree to his grave.

Some other amazing tree part of this unusual collection are “Two legged tree” , “ Needle and Thread Tree”, “Cube Tree”, “Ladder Tree” and many more.