Most popular effect of deforestation is the increase of Global warming, greenhouse gas emission, global climate, Carbon composition in the soil, the drop of oxygen levels, and biosphere imbalance. Most popular reason behind deforestation is industrial use or fuel, the expansion of agricultural grounds includes over exploitations, cattle farming, lumber and woodland experimentation. Deforestation has changed Green land to be a waste land afterward. Statistic has shown that rapid deforestation worldwide is not slowing down. It is predicted that by 2030. Biodiversity in Amazon would only 10% left compare to what we could find today. UNFAO has also stated that by 2050, total deforestation area worldwide would covers area as large as Asia sub continental. Every single year, some of us shave 8,5 million hectares of green tropical forest. Some people who are responsible to the action do not know whether the forests they cut are common land or unclaimed. Urbanization has also brought the deforestation worsen. More than 12 million acres of forest area turned to be open land because of it every year. 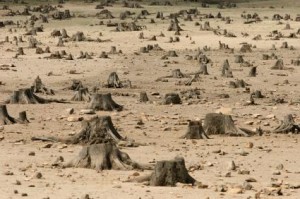